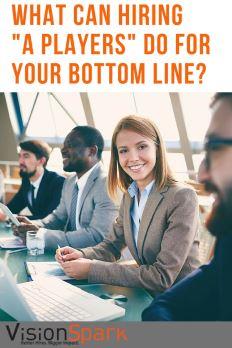 What is an A Player?

Brad & Geoff Smart are well-known for their Topgrading approach to identifying A, B and C Players, which Chris Mursau, a VP at Topgrading describes in this post. Steve Jobs is also well known for insisting on A-list hires to build A-list companies. In essence, A Players are the top-choice candidates who will outperform and be more productive in their role.

The impact of hiring A Players goes beyond their personal productivity in their role. Hiring A Players (and specifically, not hiring B and C Players) builds an A company. Research has suggested that A Players attract other A Players, and that they may elevate the productivity of others around them. It’s a natural conclusion that companies with a greater percentage of higher-performing A Players will be more productive, which implies better financial results. In other words, the more A Players you hire, the more likely your company’s success. Read on to better understand the financial impact of hiring top performers (A Players).

How much of a difference can an A Player make?

The Container Store has publicized their approach to hiring, which is that one great person = three good people. By their calculations, they get at least three times the productivity from their employees when they hire right-fit A-level Players. They refer to their 3:1 philosophy as a “purposeful understatement”; in fact, they’ve found that they can often exceed the 3:1 productivity in certain endeavors. This illustrates the exponential difference (especially over time, across many employees) that settling for a “slightly less-than” candidate can have on company productivity. A B-level candidate may seem acceptable, but if you know they are less desirable than an A-level candidate, why settle? You will pay for the slight compromise many times over.

A 2013 study in Personnel Psychology explored the output differential for top performers across several industries and found that the top 5% of employees at the organizations they studied produced a disproportionate 26% of their firm’s total output. Their “fair share” would have been just 5%, so they were over-performing at a rate of 400%. That is consistent with more recent Bain & Company research, suggesting that top performers are roughly 4x’s as productive as average (B-level) performers.

But how much of a difference does productivity make in terms of hard dollars? PwC Saratoga’s 2013/2014 US Human Capital Effectiveness Report found that overall employee productivity has finally started to rise for the first time since the recession, “…with revenue per [full-time employee] increasing from $338,773 to $370,399… .” In other words, this small 9.34% jump in employee productivity translates to a $31,626 difference per employee. Across an entire workforce, that’s not chump change. (This increase is based on aggregate data across industries. See the full report for complete information).

How much does it cost you when you hire lower performers? 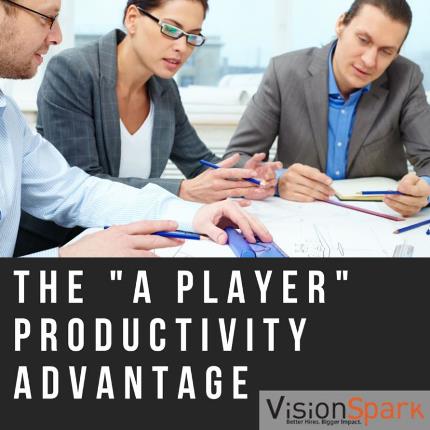 The “A Player” terminology may smack of trendiness, but the importance of employee productivity is nothing new. In 1998, Frank Schmidt and John Hunter published an article in the Psychological Bulletin,1 which despite its age is still worthy of attention because it reviews 85 years’ worth of research on selection methods in personnel psychology. Using this wealth of data, they came up with a model to calculate the costs of employee productivity, including those with less tangible work products (such as professional, managerial-type jobs).

Here’s what you should make note of in their findings:

How do you get more A Players?

If you haven’t already, assess your workforce to see where you are at today. If you have B and C Players in management roles, or if your employer brand is under-developed, you may need to do some work before you can attract the A Players you would like to have.

When you hire, let your A Players do the hiring, informed by a right-fit hiring approach and including other team members in the process. They will be able to evaluate candidates for things other interviewers might miss, such as technical ability and supervisory aptitude. A Players may be more likely to hire other A Players, versus a B or C Player, who may be threatened by an A Player and may prefer to hire a candidate based on congeniality (see Harvard Business Review: How to Hire More Top Performers).

Don’t forget to use a strategic hiring process to make every hire count. Download our interview questions for a head start.

How do you keep A Players?

According to PwC Saratoga’s report, voluntary turnover among the top 20% of an organization’s high performers increased by 13.6% between 2011 and 2012 (from 4.4% to 5.0%). This rate of increase is almost three times higher than overall voluntary turnover across the organization. Similarly, high-potential employees’ rate of voluntary separation jumped by 16.7% from 2.4% to 2.8% between 2011 and 2012. Employers should take note as these are the two key groups that “will be critical populations to engage and retain” for performance and productivity.

In the Personnel Psychology study, the top-performing 5% of employees were generally paid less than 20% above average workers in their job, but they were producing 400% more, with 4x’s greater ROI. Employers can afford to compensate more generously and still come out ahead.

It’s worth noting that the Container Store’s commitment to hiring A Players has resulted in so much more productivity that they have been able to better compensate even their lowest-level employees, for a three-way win between employees, employer and customers.

Have an opinion on hiring A Players? Share your thoughts in the comments!

Ready to commit to hiring A Players for your organization?

1. Schmidt, F. and Hunter, J. “The validity and utility of selection methods in personnel psychology: Practical and theoretical implications of 85 years of research findings” Psychological Bulletin, Sept 1998, Vol. 124, No. 2, pp 262-274.2.